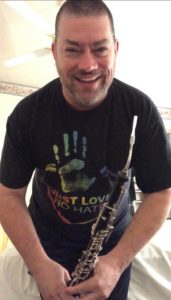 Terry Halvorson is a woodwind doubler playing oboe, English horn, flutes, clarinets, saxophones, recorders, pennywhistles and ethnic woodwinds as well as handbells. He has performed musical theatre professionally since 1981. He has played oboe, clarinet and flute in numerous collegiate and community orchestras and has played woodwinds in hundreds of musical theater productions including 8 years of national tours.

Terry also has a lot of experience playing for various denomination’s church services, including the Catholic liturgy, as well as weddings and funerals.

2 thoughts on “About Terry”